Pre-bookings ensured that we had twenty vehicles lining up on Liberty Road at Huntingwood. The only difference this time was that we had managed to negotiate four highly sought after spots on pitlane for three lucky owners of 240Zs to celebrate the 50th anniversary of the 240Z. John W supplying a standard 240Z and a rally version of the 240Z, Vince, a standard 240Z and Brad/Darrelle with their newly rebuilt 240Z. 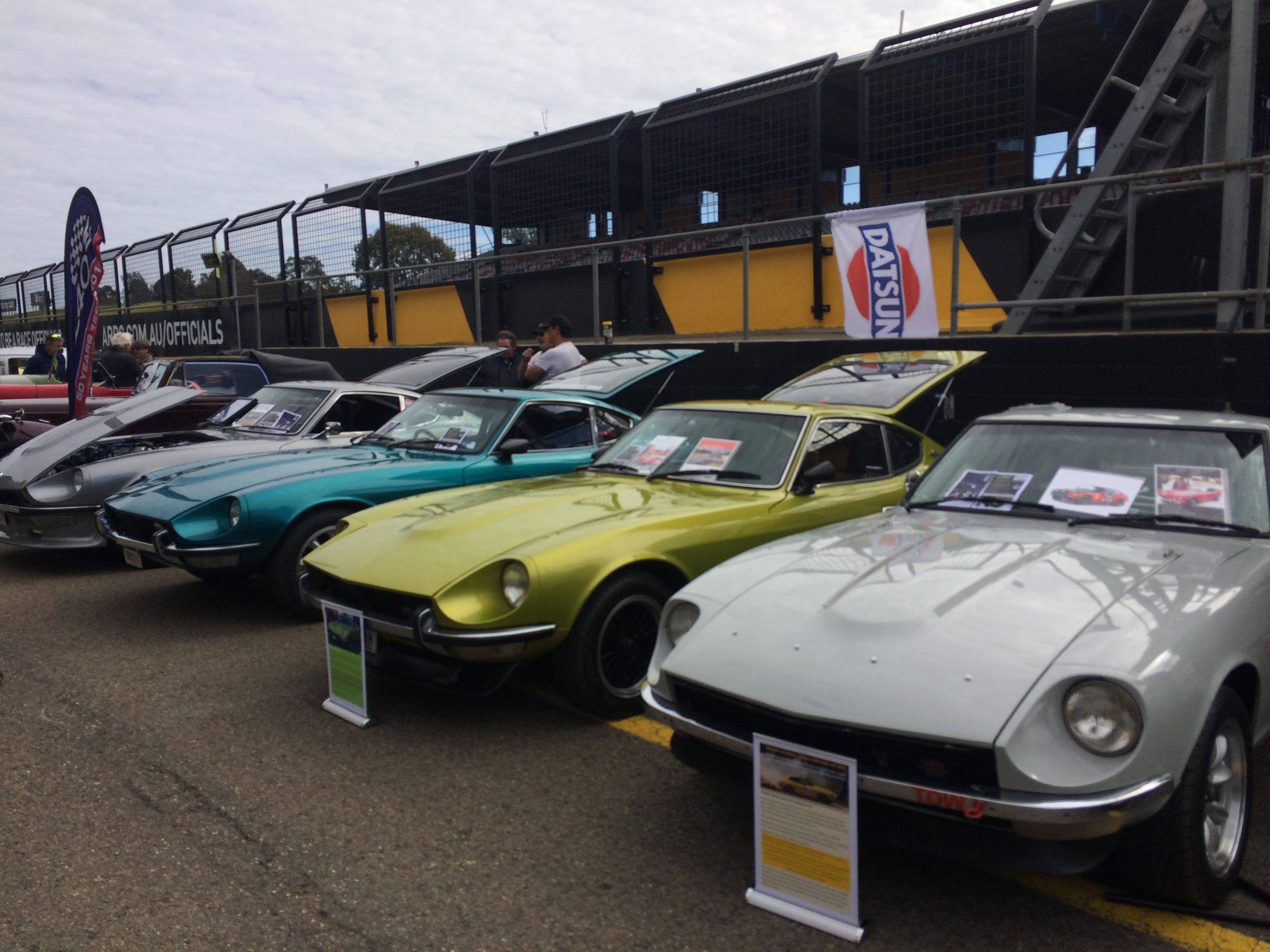 With all present and accounted for and tickets secured, the convoy started moving off at approximately 8.30am , heading towards Gate A to ensure that the “pitlane cars” were in place on time.

Approaching Gate A, there was the inevitable traffic jam comprising numerous vehicles constituting a variety of different marques, trying to get through the gateway from different directions. Ultimately, the Z car convoy made it through the gate (albeit with a bit of cross-pollination with other marques as they intersected with the convoy).

The main body of the Z car convoy peeled off to Area E, while the cars designated for the pitlane continued on through the tunnel to be guided to their pitlane positions. 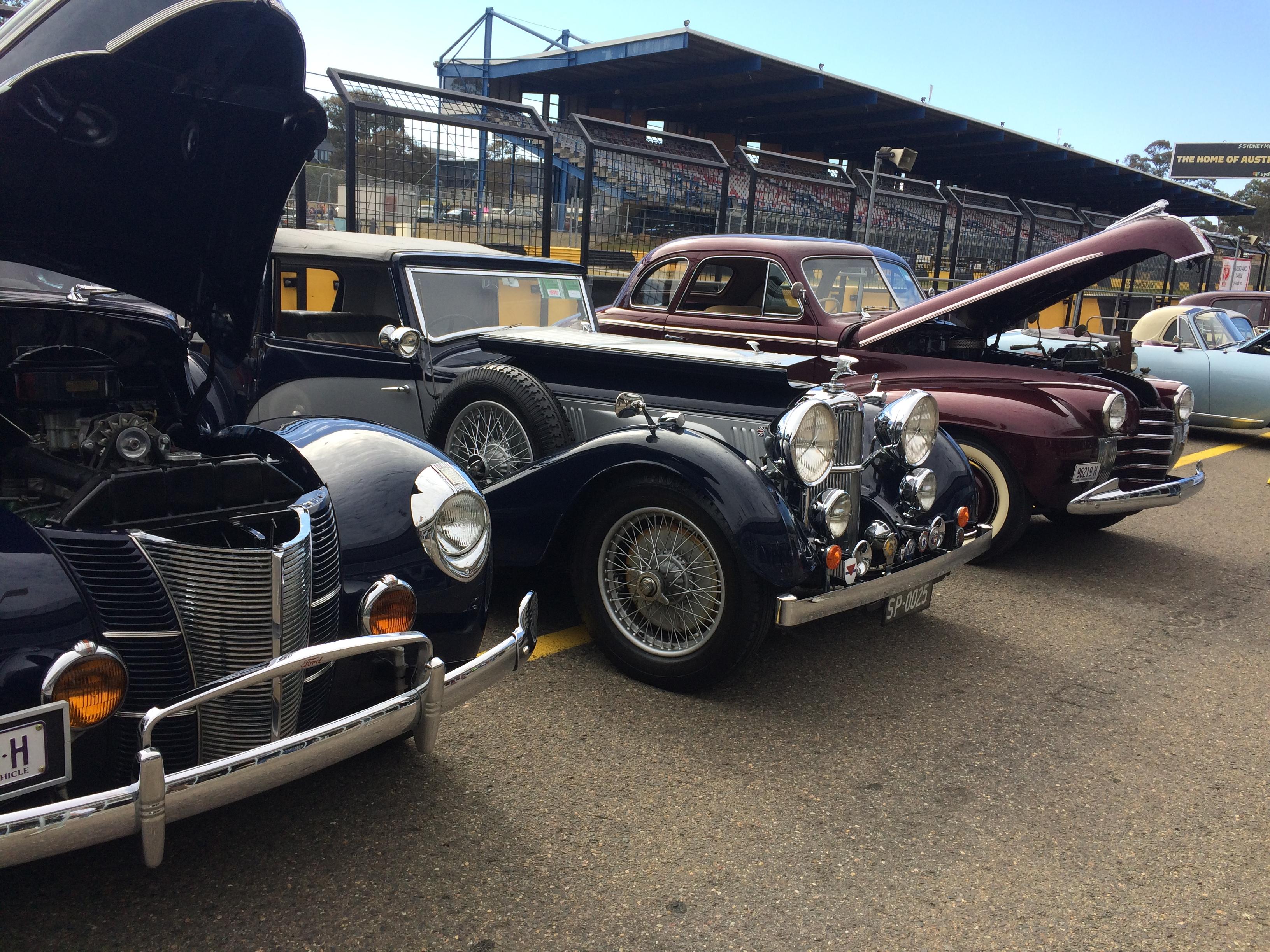 Area E being the smallest designated area meant that vehicles had to be parked with a little more precision. Ray found himself in the “Jowett camp” and had to shift.  After all the Z cars had been “bedded in”, it was noted that the main display area was a considerable distance away – not so great for the “walking wounded” amongst the group. However, there were some facilities close by – including a toilet block and coffee.

After perusing the available vehicles in Area E, it was time for the more adventurous to commence the trek to the main display areas. This consisted of the second wave as some members had already disappeared. With Robyn (of the Spanish Camino 800kms walk fame) leading the way – albeit very quickly, a small knot of members were in pursuit – heading towards the distant tunnel and ultimately the main display areas. 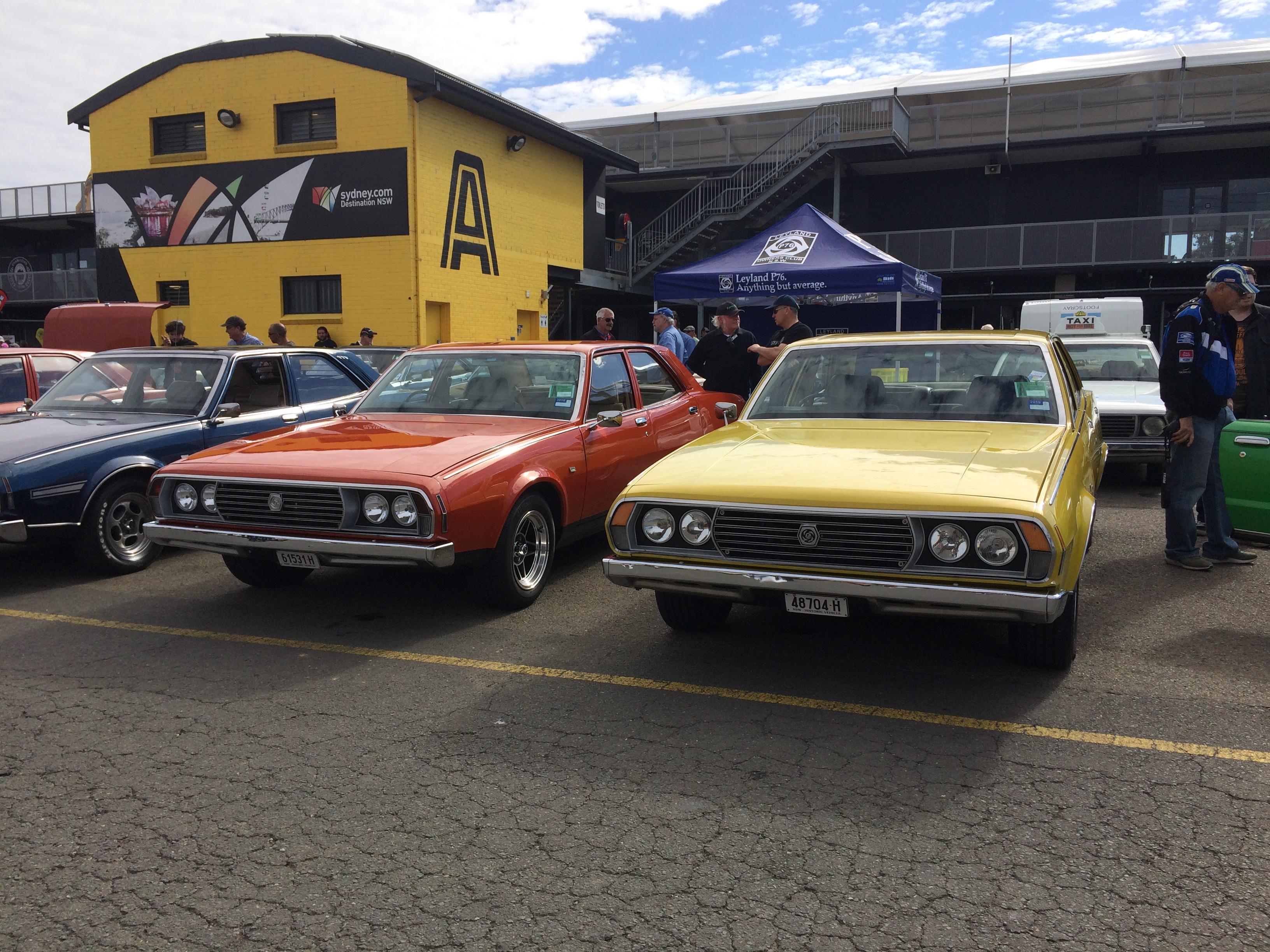 However, on exiting the gate to Area E, a sign was noted indicating that a bus was available. After waiting for about ten minutes the group was about to take off, when the bus suddenly arrived. Clambering aboard, the Zedders made their way to the unoccupied seats. The bus lurched to a start prematurely (as all bus drivers manage to do), throwing the unseated Zedders backwards – shaken but not stirred!

On arrival at the main display area, the group split to view the different marques – some gravitating towards the Ferrari exhibition – others to the Lotus stand as well as the numerous other vehicles on display.

Those reaching the pitlane were treated to a wonderful display of some of Australia’s finest vehicles. To the far right was the Z Car Club of Sydney’s offering of the four chosen 240Zs to further enhance the 50th anniversary of the 240Z. John W was observed busily handing out flyers to any interested observers. 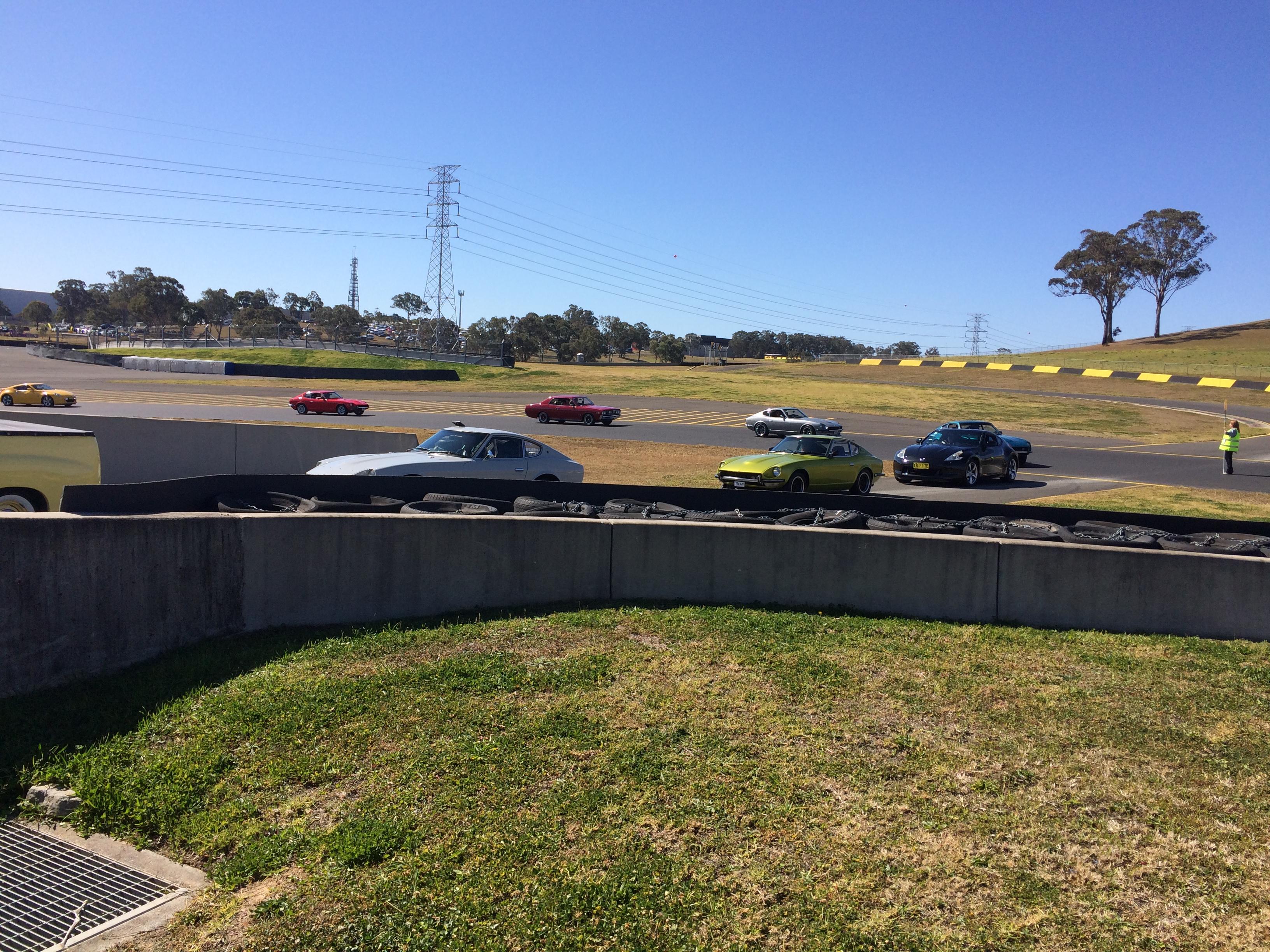 After a considerable time of circling around the different displays of numerous marques, some of the group decided to return to Area E as the time for the “run on the track” was approaching.

Mmm, no bus! Oh well – start walking! The narrow path back necessitated climbing up the rise to allow access to people coming the other way, which made the return journey a little tiresome. With some people stopping dead in their tracks to answer their mobile phones and hence blocking travel in both directions – also didn’t help.

However, safely back to Area E – the Zedders prepared for the highlight of the day – the run on the racetrack! Sitting in a queue to enter the track area for twenty five minutes didn’t quite dampen the enthusiasm. 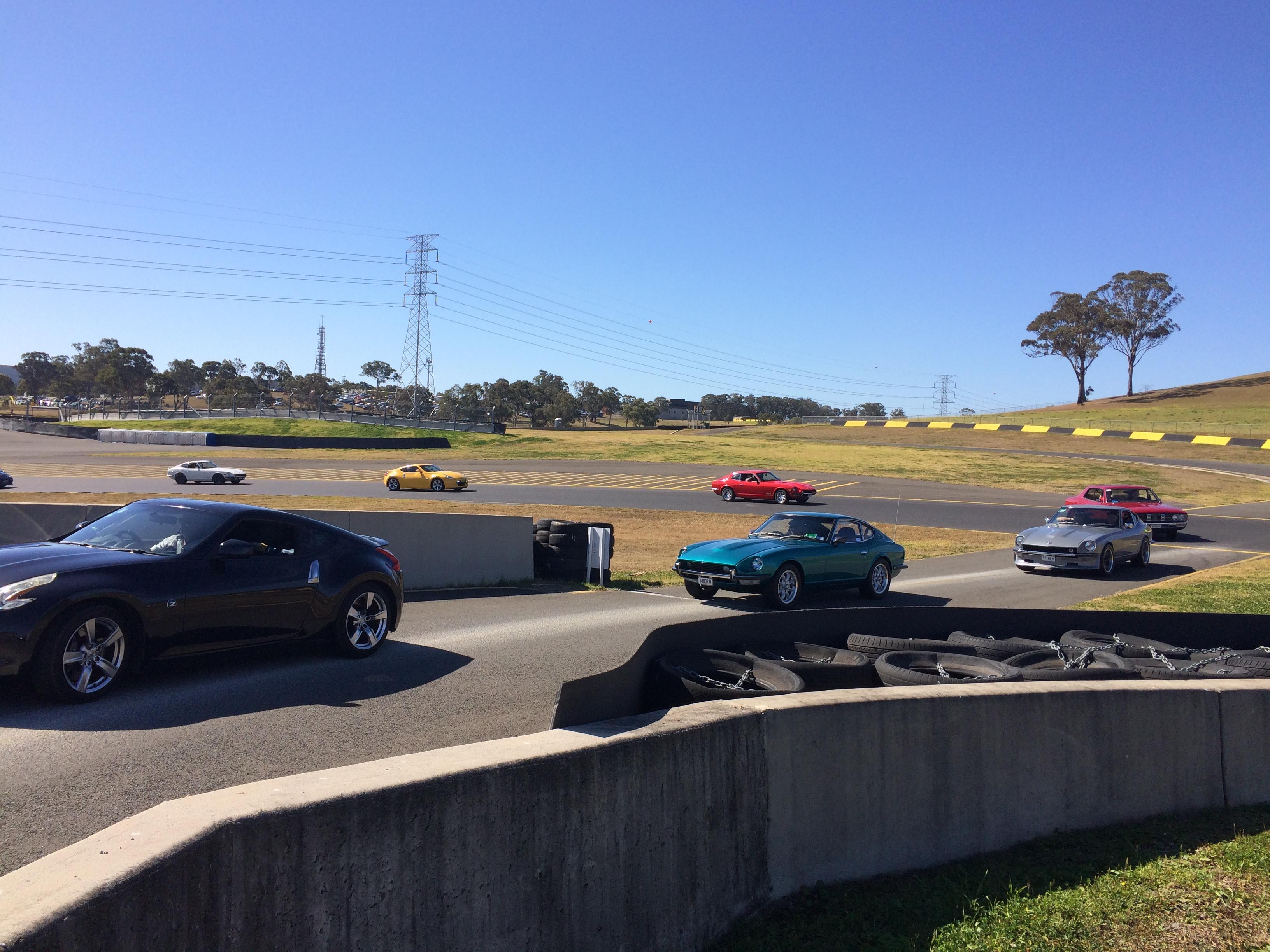 However, it was all downhill from there. With the glorious memories of the scintillating run on the track in 2018 still fresh in the minds of the passionate Zedders, the Zedders were presented with a “bog slow” run with mind boggling speeds of 60-70kms/hr (occasionally) and traffic jams – necessitating more braking than accelerating!

It was now early afternoon, and some of the Zedders started heading towards the exit. It had been an interesting day with members able to observe the numerous and rare vehicles on display and enjoy the general good natured camaraderie of our group. There will be further recognition and enhancement of the 50th anniversary of the 240Z in the activities planned for October and November this year.