A muddy sky and a few light showers of rain heralded the dawn – but we Zedders are made of sterner stuff!  As with previous northern excursions, members would be coming from all points of the compass. A South Western convoy and a North Western convoy would be complemented by some “direct entry” stragglers with an ETA of 11.00am at the Berowra Waters venue.

After an intense study of the provided Google maps it was noted that the South Western convoy could avoid the ferry trip entirely. With the ferry’s rather limited capacity, the “sea voyage” could be avoided and time could be optimised. With previous memories of very narrow winding roads, peppered with bicycles, and a long wait for the ferry – this wouldn’t be a bad thing!

Des’s newly acquired 370Z’s satnav was being temperamental and would not accept the street address for the Berowra Waters venue (we later found out that Bay Street had been inputted rather than Bay Rd). However, he bravely volunteered to be the chief navigator for the South Western convoy sans satnav.

The South Western convoy left Big Daddy’s (Casula) at around 9.30am. From Camden Valley Way there was a bit of a scramble getting all the Zedders into the correct lane for the M7 take off point. However, the journey proceeded smoothly after this.

At the Norwest Boulevarde exit, Windsor Rd and Showground Rd the provided Google maps proved to be entirely accurate. There are numerous exits to right and left within short distances on this journey, and without reliable maps or satnav – it can become a little tricky.

However, Des did an impeccable job of navigation and the convoy arrived safely at the Berowra Waters Fish Café at around 10.50am. The South Western convoy members found parking spaces on the large raised concrete platform to the left of the ground level parking area.

As the South Western convoy members proceeded onto the balcony of the Fish Café, Andrew (from the North Western convoy) was noted cobbling a number of tables together to cater for the envisaged numbers of members and guests.

This was fortunate, as a large number of Zedders were started to flood into the eatery. Although the weather was still a little overcast, the fantastic views over the bay with its vast numbers of moored boats was rather spectacular. 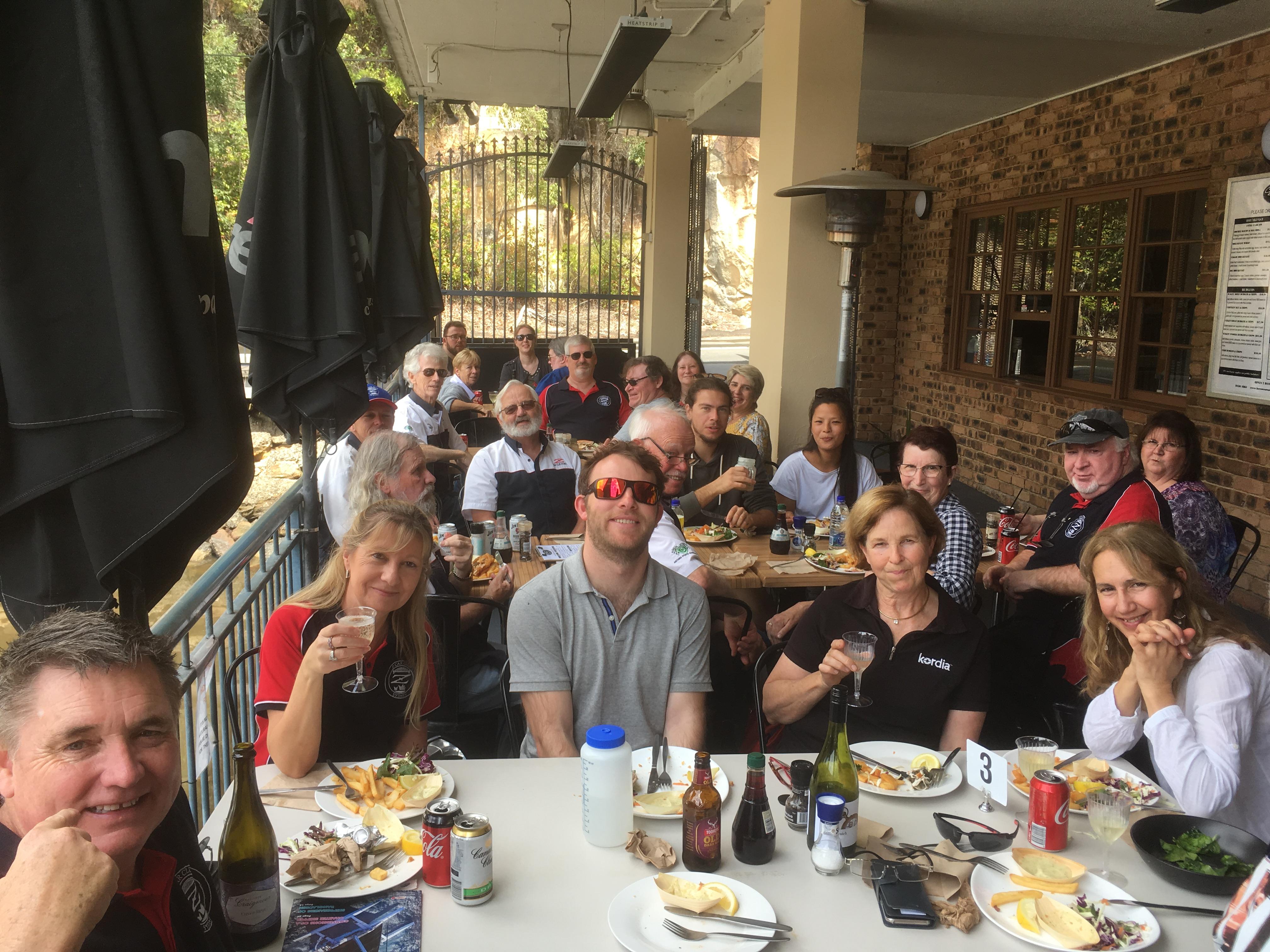 Members had brought wives and family members, and the numbers had swelled to an excellent twenty five, complemented by fourteen cars. Amongst the guests, a hairy-chested individual was noted. This was “Rox, the wonder dog” (sponsored by Anthony and Emily) – a rather large German shepherd.

Because of the large numbers of people, there was a wait for meals to be served. But the reputation of the Fish Café proved to be correct -the meals were not only reasonably priced but were also of an excellent standard.

Some members who owned 240Zs had managed to secure spots in the limited parking area on the roof of the restaurant and created a “mini display” to further advertise October’s “Zedfest”. Andrew displayed his newly acquired immaculate white 240Z, along with John W’s two 240Zs and Michael and Brad’s 240Zs amongst the group. Andrew commented to Ray that when he purchased the 240Z he hadn’t realised that it had a hand throttle. This had provided a very interesting moment when he tried to pull up with the hand throttle half engaged!

Because of the early start, members and guests were in no hurry to leave and conversations continued for some hours. This was complimented by the excellent views and occasional visits to the bottle shop at the corner of the Fish Café.  The Berowra Waters Fish Café provides a very pleasant environment with magnificent views and an excellent cuisine.

With the great turnout of enthusiastic members and guests the excursion proved to be extremely successful –  and the feedback indicated that everyone who attended enjoyed the day.